Tracing Your Family's Path from a Displaced Persons Camp

The U.S. Holocaust Memorial Museum in Washington, D.C., has created a searchable database of information on the Displaced Persons Camps and the people who passed through them. Earlier this year, the Holocaust Museum partnered with the Ukrainian Museum-Archives in Cleveland to digitize the UMA's extensive collection of DP Camp periodicals produced by Ukrainian refugees from 1945-51. Working with Kyiv-based Archival Data Systems, researchers have scanned more than 75,000 documents archived at the Tremont museum, creating a resource that scholars and others will now be able to access.

Officials from the Holocaust Museum unveiled the new resource and its search tools at a special presentation in Cleveland, a city that resettled thousands of displaced persons. "Solving the Mystery: Tracing Your Family's Path from a Displaced Persons Camp," was presented at the Slovenian National Home, 6409 St. Clair Avenue.

Photos and videos from the Displaced Persons Camp event 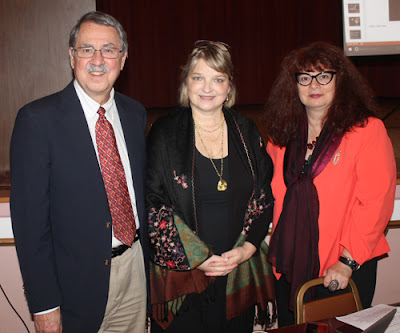