A model of the popular astromech droid, R2-D2 (Artoo-Detoo) from Star Wars was cruising along the show floor at the Wizard World Comic Con in Cleveland among both exhibitors and attendees.

Apama is the new comic superhero making waves all over.

A Cleveland ice cream truck driver of Hungarian descent discovers the animal spirit of the most powerful creature the world has ever known – Apama, the Undiscovered Animal.

Hip-hop artist Krayzeman was at the Wizard World Comic Con in Cleveland.  He told about his philosophy and the release of his new album.

Appetizers in a Lithuanian Meal

Ruta Degutis is president of the Lithuanian Club in Cleveland.  She explained the appetizers the group would be served.  Lithuanian sushi – herring in a tomato and onion sauce served at Christmas and in winter, Lithuanian dark rye garlic bread and a salad of bread, cheese and lentils.

Welcome to the Lithuanian Club in Cleveland

The Passport Adventurers visit traditional ethnic restaurants and showcases the food, culture, history of the country – in this case Lithuania.

Short history of Lithuania at Lithuanian Club in Cleveland

Ruta Degutis gave a short history of Lithuanian at an event at the Lithuanian Club in Cleveland.  She spoke about the 1000 years as a nation, Poland, amber, the female president, music festivals and more.

Spikes on the Lithuanian Tree Cake (Sakotis or Baumkuchen)

Baker Dainius Zalensas of the Lithuanian Club Bakery in Cleveland told a story about the spikes on a Lithuanian Tree cake (also called Sakotis or Baumkuchen).

The cake is built layer by layer over a rotisserie.

Lithuanians in Cleveland and ClevelandCooks.com

Linas Johansonas told about the Lithuanian tree cake (Sakotis) also called the branch cake.  It dates back to the 16th century.  It is a unique-looking hollow cake made of butter, eggs, flour, sugar, and cream.  The spikes or branches are made layer by layer over a rotisserie.

More at Cleveland Lithuanians and

It was dedicated in 1936 and features the Pillars of Gediminas, Fountain of Biruta and busts honoring Jonas Basanavicius, Maciulis Maironis and Vincas Kudirka.  It is a two-level garden both on East and MLK Blvd.

More from Lithuanians in Cleveland

Lithuanian Entrees and their most common ingredient – the potato

The potato is the main crop of Lithuania so the entrees naturally use that.

The entrees included Cepelinai, the national dish of Lithuanian along with Kugelis (potato pudding), Vedarai (potato sausage) and a more familiar sausage and sauerkraut.

Ruta Degutis told about the desserts of Lithuania that would be served to the ClevelandPeople.Com Passport Adventurers at the Cleveland Lithuanian Club.

She also explained their custom liqueur shot which included honey from her own bees and about 20 spices like cinnamon, cardamom, clove, caraway, etc.

Virginija Juodisius-Rubinski played a traditional Lithuanian wedding song played on the kanklės which is a Lithuanian plucked string musical instrument of the zither family.

The instrument is similar in construction and origin to the Latvian kokle, Russian gusli, Estonian kannel and Finnish kantele.  The song is a Lithuanian wedding song where the friends and family of the bride say farewell.

Dan Hanson told the story of the 1988 and 1992 Olympic Basketball games.

In 1988 in Seoul the USSR led by pro players (including Lithuanian NBA stars Arvydas Sabonis and Šarūnas Marčiulionis) defeated the US team of college players.

The rules changed and in 1992 the Dream Team of Michael Jordan, Larry Bird, Karl Malone, Magic Johnson and others defeated everyone to reclaim the gold.

By 1992 the USSR had fallen and Lithuania had its own team which captured the bronze in Barcelona.  They wore tie-dye uniforms in their flag color designed by the Grateful Dead.  They were the Other Dream Team.


More on Lithuanians in Cleveland

History of Lithuanian Club in Cleveland

Ruta Degutis gave a history of Lithuanian Club in Cleveland.

It was started in 1920 at East 67th and Superior where their church, St George, was founded.  It has moved a few times and now is on East 185th Street in Cleveland.

Ruta and the Hill of Crosses in Lithuania

Ruta Degutis of the Lithuanian Club of Cleveland told about her trip to the Hill of Crosses in Lithuania.

The Hill of Crosses in Lithuania

Joseph Meissner told the history of the Hill of Crosses in Lithuania.

It is believed that the first crosses were placed there after the 1831 Uprising. Over the generations, not only crosses, but giant crucifixes, carvings of Lithuanian patriots, statues of the Virgin Mary and thousands of tiny effigies and rosaries have been brought here by Catholic pilgrims.  Estimates say over 100,000 crosses were there in 2006 and it keeps growing.

More on Lithuanians in Cleveland

Joseph Meissner told the story of Jadwiga, aka Hedwig who was a leader of Lithuania and Poland as a teenage girl.  She was later canonized by the Catholic Church.

Possibility of Russian Aggression in Baltics

She was asked about the mood and possible fears in the Baltics about the current Russian policies.
She told how many have now had a taste of democratic life and are concerned about a return to Soviet era control.

She spoke of what it meant for Lithuania to become part of NATO. She called it one of the most important days in Lithuanian history.

She spoke of diaspora of Lithuanians around the world.  The generation of Displaced Persons who left after the war is dying off and there is an interest from the younger people.

Ambassador Ginte Damusyte-Damusis was the keynote speaker at the 98th Anniversary of the Lithuanian Declaration of Independence Program in Cleveland. She spoke of the improvement since the Soviet Union era specifically in the energy sector.

Lithuania had been dependent on Russian oil and gas but is moving toward energy independence.  This is especially important now as Russia uses energy for political influence.

Before she worked with the Lithuanian Diplomatic Service, Ginte Damusyte-Damusis headed the Lithuanian Information Center during the Soviet Union times.

The goal was to keep Lithuanian alive internationally and deal with human rights and other issues and tell the world of the mass public support for the Sąjūdis (Movement).

She told of the progress since the reestablishment of independence.

Ginte Damusyte-Damusis has served as Ambassador from Lithuania to Austria, Slovakia, Slovenia, Croatia and Canada. Currently she is director of the department in charge of diaspora affairs in Vilnius, Lithuania.

She was the keynote speaker at the 98th Anniversary of the Lithuanian Declaration of Independence Program in Cleveland.

She told ClevelandWomen.Com about breaking the glass ceiling in the diplomacy world.

After the 4th annual Cleveland Kurentovanje parade, people moved into the Slovenian National Home to continue the celebration.

Here are the Princess and Prince of Kurentovanje 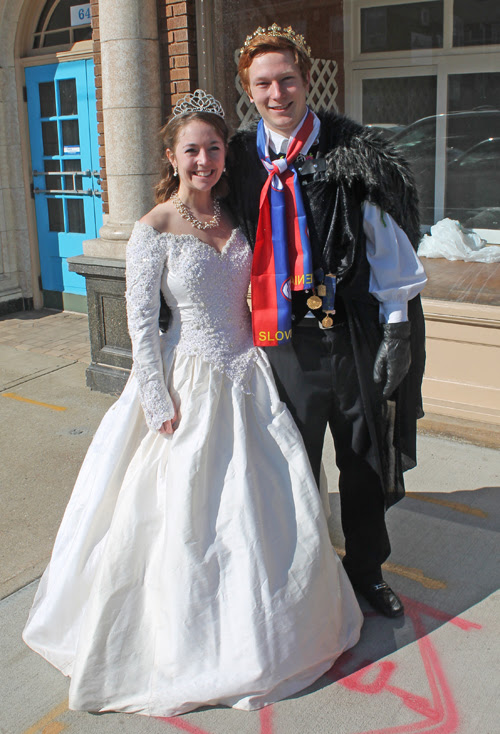 The 4th annual Cleveland version of the most popular carnival in Slovenia - Kurentovanje - began with a parade. The units gathered at Sterle's on East 55th and marched up St Clair to the Slovenian National Home.

Kurentovanje is a cultural event which connects ethnology, culture, arts, and people from all over Europe. It has been celebrated in Slovenia for the past 50 years. The central figure of the carnival, the Kurent, is believed to chase away winter and usher in spring with its supernatural powers.

Kurentovanje has a Mardi Gras feel so many participants wore masks to help scare away winter.

Lots of pictures from Kurentovanje

Here is a video of parade highlights

Star Wars, Cosplay, Superman, Doctor Who, X-Men – what do they have in common?

Filmmaker Johnny Wu explains why both Asian and Western cultures have larger than life characters or superheroes.

He also talks about his popular Dr. Who fan film series called Trace: The Doctor.  Search YouTube for Trace the Doctor to watch the episodes.

The making of Fan Films – interview with Johnny Wu

Filmmaker Johnny Wu explains what a fan film is using as an example his Doctor Who fan film called TRACE: The Doctor.

He is teaching others how to make fan films at the Wizard World Comic Con in Cleveland.

Some highlights of the 2016 Kurentovanje Parade in Cleveland.

Lots of scary Kurents, polka music, Slovenian groups and others.
They marched up St Clair to the Slovenian National Home.

See more of Slovenians in Cleveland and more Kurentovanje highlights

The Chardon Polka Band played “No Beer Today” while some of the Kurents from the Cleveland Slovenian Kurentovanje Parade and Festival danced.

The Chardon Polka Band played “In Heaven there is no beer” while some of the Kurents from the Cleveland Slovenian Kurentovanje Parade and Festival danced.

Before the 42nd annual Black History Month Flag Raising Ceremony in the Cleveland City Hall Rotunda, Amir Khalid Samad of Peace in the Hood gathered some of the elders and the next generation to the front of the room.

He spoke of the intergenerational theme of the ceremony and how we should learn from the elders who have been through so much.
That goes with the motto “Each one, teach one. Each one, reach one.”

Cleveland, OH – 100 years ago in 1916 the first garden in what would become the Cleveland Cultural Gardens was dedicated. Known today as the British Cultural Garden, its dedication in April of 1916 hosted members of the British Royal Family, unveiled a bust of Shakespeare, and presented literary works of English authors.

Under the shepherding of the Cleveland Cultural Gardens Federation (CCGF) there are now 29 unique nationality gardens (and more in the works) on over 250 acres along MLK and East Boulevards.

The motto of the CCGF is “Peace through Mutual Understanding” and each garden and the Gardens as a whole exemplify peace and understanding through each nationality sharing its achievements and contributions to the betterment of society. Within the gardens are numerous depictions of significant personalities in the pursuit of peace: Gandhi, Mother Teresa, Confucius; music: Liszt, Beethoven, Bach; literature: Shakespeare, James Joyce, Mark Twain; and sciences: Tesla, Leonardo DaVinci, Madame Currie among many others. It is through this recognition of each culture’s contributions that real understanding among diverse people can take place.

The City of Cleveland is joining the CCGF in making the Centennial celebration a true representation of the wonderful ethnic diversity that makes Cleveland so great.  From the initial Gala celebration on April 8, 2016 to the 71st annual One World Day in the Gardens on August 28, 2016, there will be numerous events for the community to celebrate this truly unique milestone.

Along with the city, many civic-minded institutions and foundations will help the Cleveland Cultural Gardens Federation celebrate this once in a lifetime anniversary.  The CCGF is announcing a Centennial Campaign to raise an initial $750,000.   The long term goals are to create an ongoing Endowment Fund to help maintain and grow the gardens for the next hundred years. The funds will be used for restoration, improvements, and to focus on the mission of the gardens, Peace Through Mutual Understanding.

The centerpiece of this legacy project will be the construction of a Centennial Plaza to be located at the midway point of the gardens. It will feature a large open plaza for performances and gatherings with a special monument dedicated to the many ethnic communities that preserved the legacy of the cultural gardens for a hundred years and to those who will carry on the tradition for the next 100 years.

This special year allows for a variety of ways others can become involved. Details can be found at http://www.clevelandculturalgardens.org/centennial-celebration/.