This is the 95th year that GE has put on a magnificent Christmas lighting display at GE Nela Park in East Cleveland Ohio. The display features more than 500,000 LED lights along Noble Road.

Great Lakes Geek Dan Hanson took a walk through the display. Of course he meant to say 2019 not 2020. Eager for the New Year we guess.

Watch the video by clicking the white arrow. make it full screen for the best effect.

Yes, the math checks out. 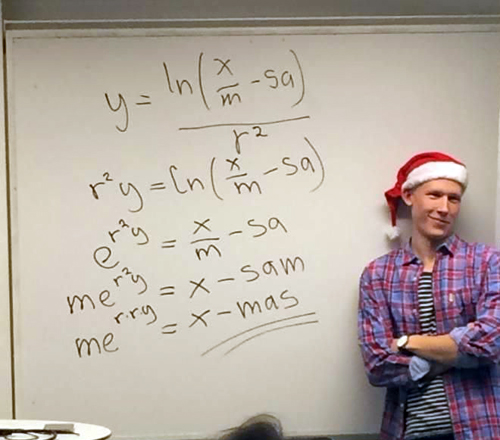 Merwin's Wharf is one of my favorite go-to places in the Flats.

Originally constructed 22 years ago during the inaugural year of the Major League Baseball All-Star Legacy effort during the 1997 All-Star Week in Cleveland, the Larry Doby All-Star Playground has been renovated to include updated equipment and refurbished flooring.

Members of the Boys & Girls Clubs of Cleveland - King Kennedy Club and youth in the nearby community will be able to use the Playground as a daily recreational outlet. The ribbon cutting took place with Larry Doby Jr. and Cleveland Indians owner Paul Dolan among others in attendance.

Photos and videos from the Larry Doby ceremony

I love the quote from Larry Doby Jr. who said "My Dad said he never got booed in Cleveland." 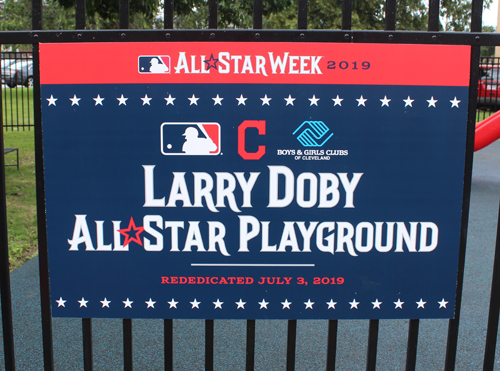 Shul Boys is a casual unisex motorcycle riding club comprised of Jews who ride all brands of motorcycles at different levels of competence. They believe in, and are proud of, their Jewish heritage and ride motorcycles. Shul Boys is located in northeastern Ohio, mainly in the eastern suburbs of Cleveland. ShulBoys is an official affiliate club under the umbrella of the Jewish Motorcycle Alliance (JMA).

Ian Abrams, President and Founder of the Shul Boys attended the Kol Israel Memorial on his 1937 Harley Davidson motorcycle.


Kol Israel Foundation is an organization of Jewish Holocaust Survivors, their families, and supporters. Each year they hold an annual Memorial Service "in memory of the six million innocent Jewish men, women and children who perished by the hands of the Nazis. Though their bodies have perished, their souls and their spirit will forever remain immortal."

The annual Memorial Service was held at Zion Memorial Park in Bedford Heights on Sunday October 6, 2019. It was co-sponsored by Kol Israel Foundation and the Jewish Federation of Cleveland.

Photos and videos of the Holocaust Memorial

The Federation of Indian Community Associations (FICA) hosted a celebration on the 150th anniversary of the birth of Mahatma Gandhi in the India Cultural Garden in Cleveland on October 2, 2019. Though it was raining steadily, many people assembled to honor Gandhi in the Garden. 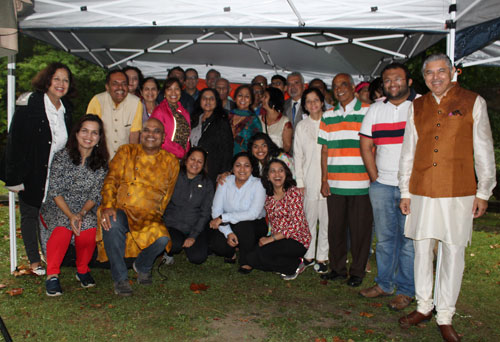 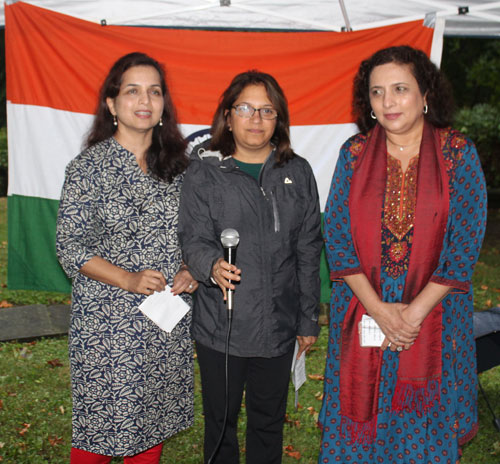 The annual Cleveland Armenian Festival at St. Gregory of Narek Church in Cleveland was held September 20-22, 2019. Church tours were given but we took our own walk through the beautiful grounds and Church.

The annual Cleveland Armenian Festival at St. Gregory of Narek Church in Cleveland was held September 20-22, 2019. There was music, dancing, food, games, Church tours and more.

The Hamazkayin Armenian Dance Ensemble is a 15 year old dance group from Detroit with 140 dancers. They performed at the annual Cleveland Armenian Festival at St. Gregory of Narek Church in Cleveland.

Watch videos of the performances and see more photos

The annual Cleveland Armenian Festival at St. Gregory of Narek Church in Cleveland was held September 20-22, 2019. There was music, dancing, food, games, Church tours and more.

Photos and videos from the Cleveland Armenian Festival

Inside the Church Hall there was Armenian cultural information as well as the delicious homemade food.  Outside lamb and chicken sizzled on the grills.

See the Vietnamese Cultural Garden on One World Day

Yuri Gagarin was a Russian cosmonaut who became the first human to journey into outer space, completing one orbit of Earth on April 12, 1961. Gagarin became an international celebrity and was awarded many medals and titles, including Hero of the Soviet Union, his nation's highest honor.

He was honored with a bust in the Russian Cultural Garden in Cleveland during the One World Day celebration.

Photos and videos of the Gagarin bust unveiling.

One World Day 2019 in the Cleveland Cultural Gardens

The Cleveland Cultural Gardens Federation hosted the 74th annual One World Day on August 25, 2019. Police estimates say that over 30,000 people visited the Gardens and attended One World Day.

Naturalization Ceremony on One World Day

After the Parade of Flags on One World Day, people gathered in the Serbian Garden for the traditional Welcome and Naturalization Ceremony.

This began with the posting of the colors by a Cleveland Police Color Guard and the singing of the National Anthem led by the Kosovo Choir.

See more from the One World Day Naturalization Ceremony

The Cleveland Cultural Gardens Federation hosted the 74th annual One World Day on August 25, 2019. Police estimates say that over 30,000 people visited the Gardens and attended One World Day.

A highlight of One World Day is the Parade of Flags where people in costumes of their heritage carry the flags. This year was undoubtedly the largest and most colorful in memory. Efforts were made to include communities that do not (yet) have a Cultural Garden and they were warmly welcomed.

A very special event took place just as the Parade units reached the reviewing stand. The Baltic Way or Baltic Chain was a peaceful political demonstration that occurred on August 23, 1989. Approximately two million people joined their hands to form a human chain spanning 675.5 kilometers (419.7 mi) across the three Baltic states – Estonia, Latvia, and Lithuania, which were considered at the time to be constituent republics of the Soviet Union.

To commemorate this historic event and in keeping with the Cultural Gardens motto of "Peace through Mutual Understanding" a remembrance of the Baltic Way took place.

Consul Bublys told of the Baltic Way that took place 30 years earlier in Estonia, Latvia and Lithuania. The marchers in the Parade of Flags at One World Day, led by delegations from the Baltic countries, commemorated this historic event by forming their own human chain joining hands along Martin Luther King Blvd. in Cleveland. 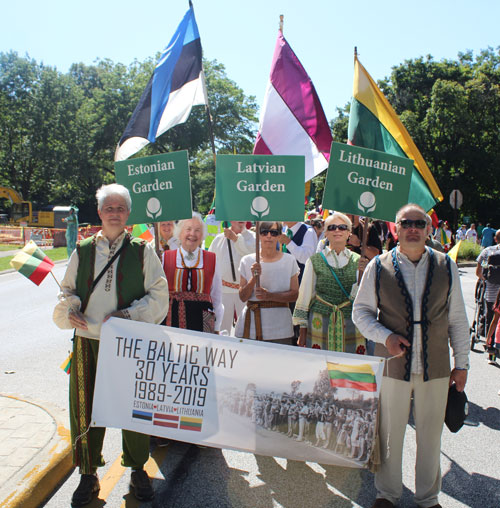 The Cleveland commemoration of the Baltic Way was produced by Dan Hanson with Angela Woodson, Al Griffin and members of their team after learning of the historic event from Roman Zorska. The Estonian, Latvian and Lithuanian communities came on board first and then all others to show solidarity with the ideals of the historic Baltic Way and showcase the diversity of Cleveland. The chain stretched far down MLK Blvd. in Cleveland with thousands joining hands.

The front was designed by artist Zerihun Yetmgeta with each panel on the front depicting a broad period of Ethiopian history. he Back Panel is titled "When the Sun Gets the Moon".

Photos and videos of the new Ethiopian monument 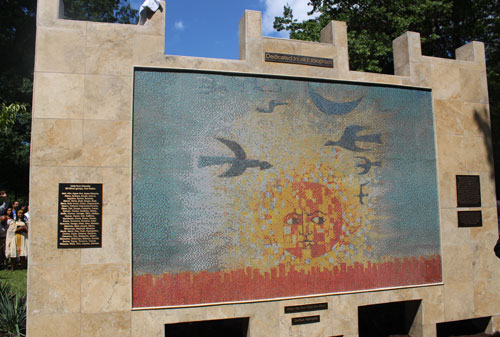 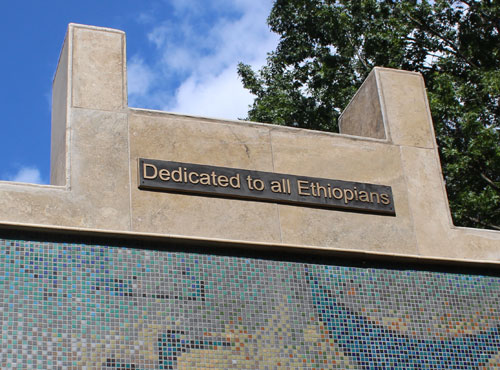 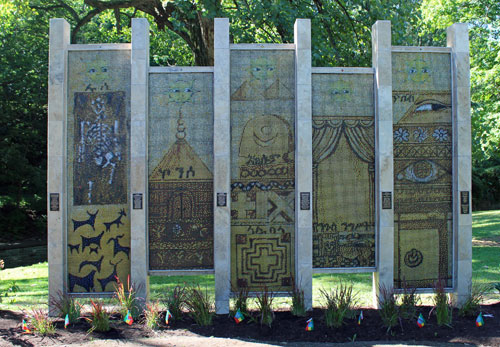