Hitler and the Browns

Not for the faint of heart 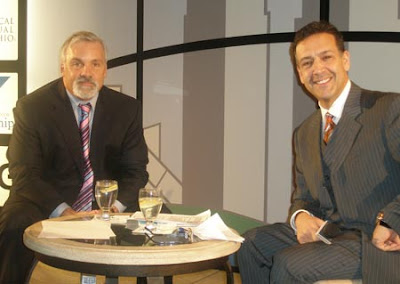 I am always a little skeptical of economic forecasts. It seems that most economists, by their own admission, are what they call two-handed economists.

This means that they make a prediction and then say “on the other hand…” and make a different prediction.

Not a lot of help.

But when an economist with the reputation of Richard DeKaser, Senior VP & Chief Economist, National City Bank, speaks you should listen.

What was perhaps the best part for Cleveland and our region were the few short comments made by Paul Clark, Regional President of National City Bank now part of PNC. (Yes, that mouthful is what they call the bank now)

So many in Cleveland are/were worried about the loss of NCB’s charitable dollars to the community. Clark tried to assuage that fear.

Give Clark a listen and see what DeKaser predicts for 2009.

One interesting note stood out. DeKaser said we need to give a stimulus check to those who don’t pay taxes because they will spend it! The tax payers who got checks were more likely to save it or apply to bills but the non-taxpaying would spend it.
Posted by Dan Hanson at 1/17/2009 01:25:00 PM

Remind me of this next time I complain

This has been around for a while I guess, but it was new to me. A short video of a guy with no arms or legs speaking to a bunch of students.

It's well worth the 2 and 1/2 minutes it takes to view the video.

The good sisters at St. Margaret Mary gave me a very good start in grammar but with relaxed societal expectations, built-in spelling and grammar checkers and eagle-eyed editors at Inside Business Magazine I felt that I had lost some of my grammar chops.

In this day of short message services, texting to BFFs and a preference for speed rather than grammar in e-mail, proper grammar can make you stand out.

So I decided to be less lazy with my writing and speaking and used this book as a refresher for some of my difficult areas.

Some of the rules I learned way back when still apply - as in Effect is (usually) a noun and Affect (usually) a verb.

I was bummed that my old trick of Principal being a Pal and hence a person didn't apply but most of the other stuff either was still in the old noggin or came back pretty fast.