Albanian Ambassador to the United States Floreta Faber met with former Cleveland City Councilwoman Dona Brady and a group of Albanian community leaders for a tour of the Albanian Cultural Garden in Cleveland,Ohio USA.

Dona Brady has been a delegate representing the Albanian Garden and was involved in its dedication, the Mother Teresa statue and hosting the president of Albania, Mayor of Fier and other dignitaries. In their walk through the Garden, Ambassador Faber told how Albania had been closed off for many years till 1990 and the communists tried to convince the people that the United States was their biggest enemy. But once it opened up they are great friends of the US and joined NATO in 2009. As they continued their walk toward the Mother Teresa statue, Dona Brady told how the Garden came about and some of the events that have taken place there.

Watch the video of the Ambassador and Dona in the Albanian Garden.

HOLA Ohio is a 501c3 Latino organization based in Painesville with a mission to empower the Latino community by creating opportunities through education, outreach, leadership development and economic advancement.

In 2016 HOLA embarked on a project to develop a Hispanic community center to meet the demands of the growing Latino community and demand for its services.

On May 5, 2022 the HOLA Hispanic Community Center had its grand opening.

Great traditional performances at the grand opening of the new HOLA Hispanic Community Center including Los Jilgueros de Altamira from Mexico and the HOLA Folkloric Dancers.

Pics and videos of the Mexican performances

The Polish Constitution of May 3, 1791 was the first constitution to follow the 1788 ratification of the United States Constitution. May 3 was restored as an official Polish holiday in April 1990, after the fall of communism. It is celebrated in Cleveland with events including a ceremony at the Polish American Cultural Center in Cleveland's historic Slavic Village neighborhood and this parade down Ridge Road in Parma. 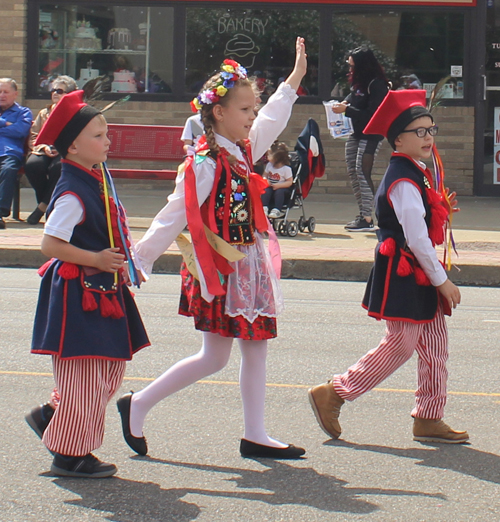 Fan Expo (formerly Wizard World) was back in Cleveland the weekend of April 30, 2022. Billed as "the ultimate playground for Comics, Sci-Fi, Horror, Anime, and Gaming. Three BIG days of citywide events, family-friendly attractions and world-renowned celebrities including William Shatner, Katee Sackhoff and many more. 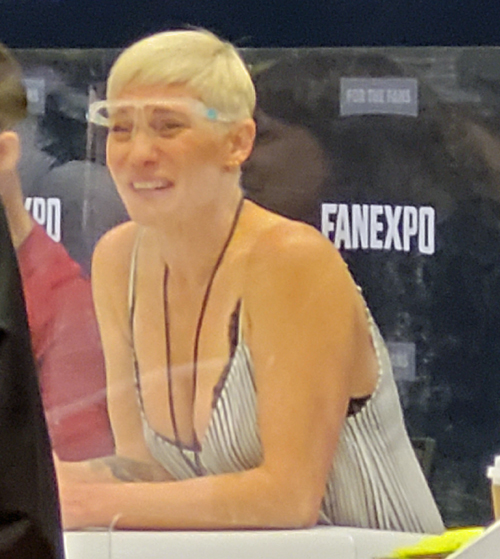 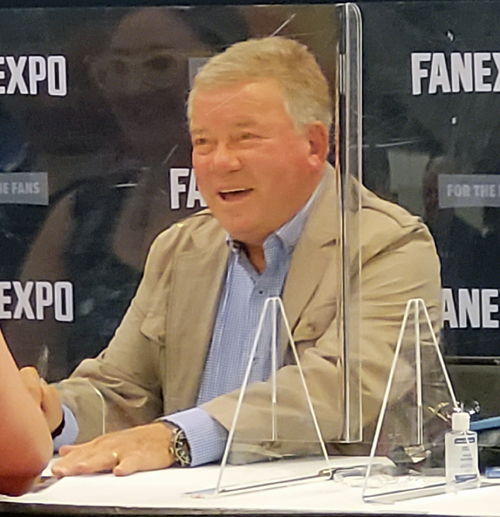 The huge show floor had lots of vendors selling collectibles, original art, comic books, toys, games, clothes, gear, etc. There were also educational and entertainment sessions off the main show floor. As always the costumes of the vendors and attendees were the best part of the event. 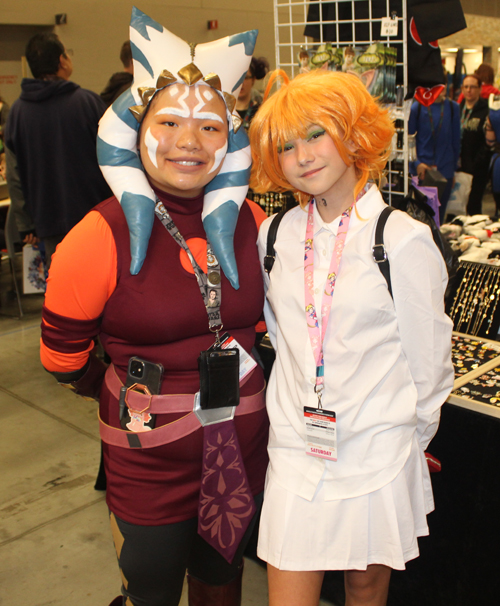 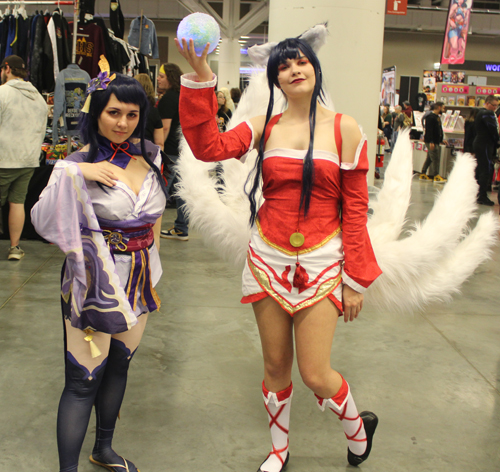 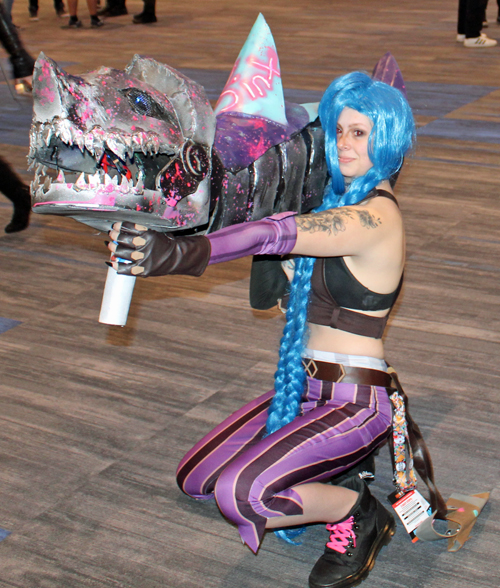 The Rotary Club of Cleveland is the home club of Arch C. Klumph, known as the father of The Rotary Foundation. Every year Cleveland Rotarians live the Rotary International “Service Above Self” motto. With countless hours of member planning and execution lead by their service committees, they provide a meaningful impact in the community, internationally, with youth, and in the business community. 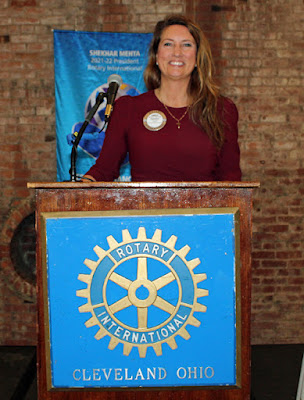 Each year they present an International Service Award to a person or group.

The Rotary Club of Cleveland's International Service Award was presented to the Cleveland Council on World Affairs on April 21, 2022. This award celebrates Rotary International's vision of a "world where people unite and take action to create lasting change - across the globe, in our communities, and in ourselves."

Photos and videos from the Rotary-CCWA event

The Cleveland Guardians are offering some new foods at Progressive Field for the 2022 baseball season.

This includes items such as a Chicken and Waffle sandwich, Plant-based Nachos, Pork Mac and Cheese in a waffle cone, Wisconsin brat burger on a pretzel bun and more.

You can go to the stands to get your food when you are at a game or order it on your phone for mobile delivery.

I really liked the Chicken and waffle and the Footlong Chili Dog which has a spicy chili and onion.

I tried the plant-based nachos and with the cheese and salsa and jalapenos did not even notice that the “beef” was plant-based. Hungry yet?

Fun with Maps – Kaliningrad aka Königsberg

This episode of Fun with Maps takes a look at a very strategic piece of land called Königsberg or Kaliningrad.

Kaliningrad is actually a city in the administrative center of Kaliningrad Oblast, a Russian exclave between Poland and Lithuania on the Baltic Sea. Remember that an enclave is a piece of land that is totally surrounded by a foreign territory. An exclave is a piece of land that is politically attached to a larger piece but not physically having the same borders with it because of surrounding foreign territory. Many entities are both enclaves and exclaves. Kaliningrad is an exclave because while politically attached to Russia it is bordered by Poland and Lithuania and the Baltic Sea. An oblast is a political and administrative division of a country. Oblast is a term used by many former Soviet countries that is something like states or provinces.

So how did Russia get territory to the west of Lithuania and north of Poland? It’s a long story starting with Prussia. For much of the last 700 years or so this land was Königsberg, an historic Prussian city that then became German. As you will see, Germany was forced to give up huge patches of its conquered land at the end of WWII.

In 1945 the Potsdam Agreement was signed by the USSR, Britain and the USA. It specifically gave Kaliningrad (known as the German Königsberg at the time) to Russia, without opposition. As you can tell from the map, it’s very important as Russia’s Baltic Navy base.

It was also a center of knowledge and culture with people such as Immanuel Kant, Leonard Euler, Christian Goldbach and others there.

The 2022 St Patrick's Day Parade in Cleveland took place after missing 2 years because of the Covid pandemic.

Before the Parade honorees and dignitaries gathered on the steps of the Cosgrove Center including Grand Marshall Tom McManamon, Mother of the Year Rita Lally, Inside Co-Chair Eileem Mangan Stull and Outside Co-Chair Patricia Coleman Lavelle.

Because the 2020 Parade had to be cancelled, the 2020 honorees were also there: Grand Marshall Tom Scanlon, Mother of the Year Kathleen Mangan, Inside Co-Chair Maureen Mohney and Outside Co-Chair Christopher Cooper.

Jim Kilbane served as MC and Katie Cooper led the Irish anthem in Gaelic and then the US anthem. Watch a video of the ceremony before the Parade:

We have posted photos and videos of the entire Parade broken down in segments. 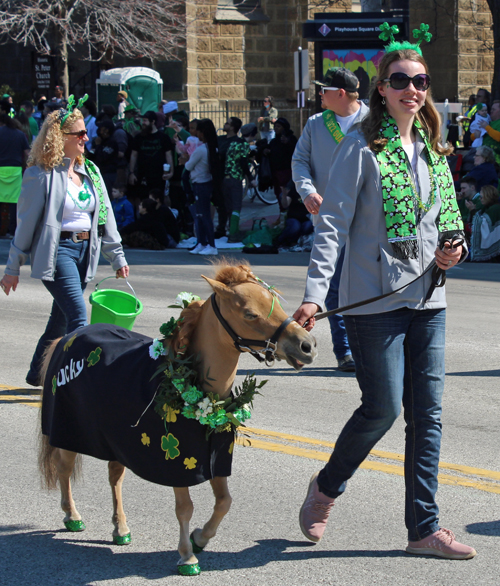 Alberto Giacometti - Toward the Ultimate Figure - Cleveland Museum of Art

The latest exhibit at the Cleveland Museum of Art is called Alberto Giacometti - Toward the Ultimate Figure. #TowardTheUltimateFigure 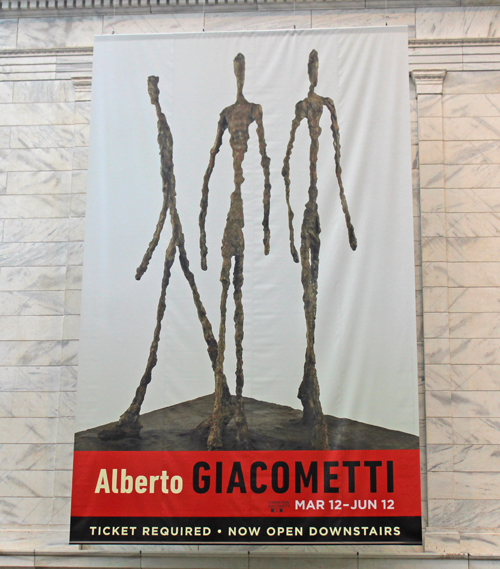 The exhibition Alberto Giacometti: Toward the Ultimate Figure gathers an ensemble of masterpieces focusing on the artist's major achievements of the postwar years (1945-66). Combining all media-sculpture, painting, and drawing-the show of 60 works draws upon the deep resources of the artist's personal collection and examines a central, animating aspect of his oeuvre: his extraordinary, singular concern for the human figure. Co-organized by the Fondation Giacometti in Paris and the Cleveland Museum of Art, the exhibition will also be presented at the Museum of Fine Arts, Houston; the Seattle Art Museum; and the Nelson-Atkins Museum of Art in Kansas City. So we are very fortunate to have it here in Cleveland and first.
If you are expecting typical sculptures of people that look just like them, you will be surprised. Giacometti is best known for the bronze sculptures of tall, thin human figures that often look emaciated. Giacometti once said that he was sculpting not the human figure but "the shadow that is cast". 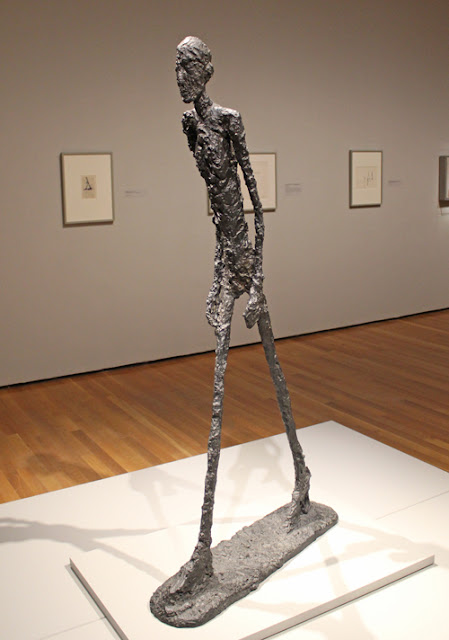 Here is a short video tour of the exhibit

Rally for Ukraine in Parma

Parma Ohio is a suburb of Cleveland that has a large and strong Ukrainian community including an area known as Ukrainian Village. With the atrocities of the criminal invasion of sovereign Ukraine by the madman Putin, the Ukrainian community, friends and supporters gathered on Sunday February 27, 2022 to show support.

The event began with solemn prayers for the country and people of Ukraine.

Marta Liscynesky-Kelleher, president of the United Ukrainian Organizations of Ohio, an umbrella group for more than 50 Ukrainian cultural, political and other organizations in the state, served as MC.

After her remarks she introduced speakers including:

Pictures and videos of all the speeches at the Ukraine Rally
Near the end of the ceremony the crowd sang a Ukrainian song wishing 100 years of life and then God Bless America.
After the ceremony the people gathered outside the Church with signs and sang songs and showed support for Ukraine. 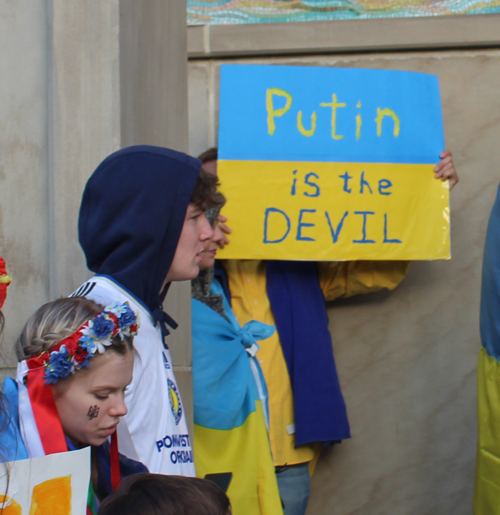 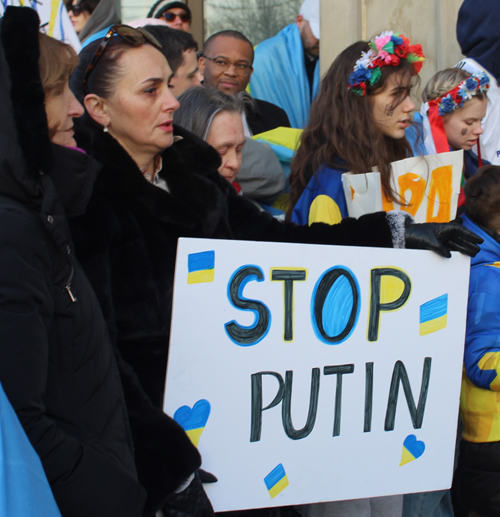 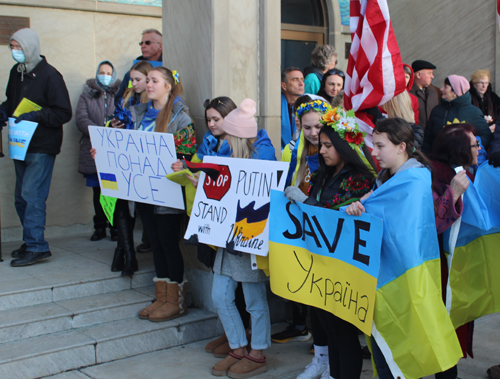 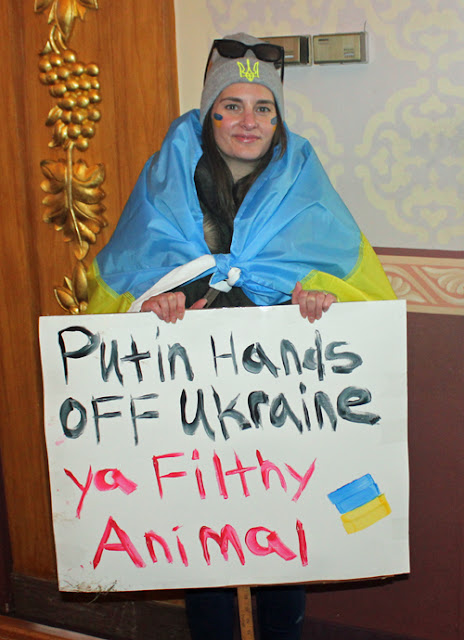 We had always planned on doing a Fun with Maps episode about Ukraine but due to the tragic current situation we moved it up in order. People are understandably very curious to know more about the country of Ukraine. And yes it is a country. It is not THE Ukraine; it is the country of Ukraine. Using the term THE Ukraine makes it sound like a region of another country as opposed to a sovereign nation.

Ukraine is the second-largest country by area in Europe after Russia, which it borders to the east and north-east. Ukraine also shares borders with Belarus to the north; Poland, Slovakia, and Hungary to the west; Romania and Moldova to the south; and has a coastline along the Sea of Azov and the Black Sea. It spans an area of 233,062 sq. miles with a population of 43.6 million. That makes it the eighth-most populous country in Europe.

We briefly talk about the history of Ukraine including the tragedy at Chernobyl and the Holodomor. We also touch on the great writer Lesya Ukrainka and pysanky Easter eggs.

The 10th annual Cleveland version of the most popular carnival in Slovenia - Kurentovanje - was a week long event featuring cooking demos, language instruction, a dance party, fun run and more. But the highlight was the annual Kurentovanje parade followed by the festival celebration. Because of Covid concerns the festival was held outside the Slovenian National Home. 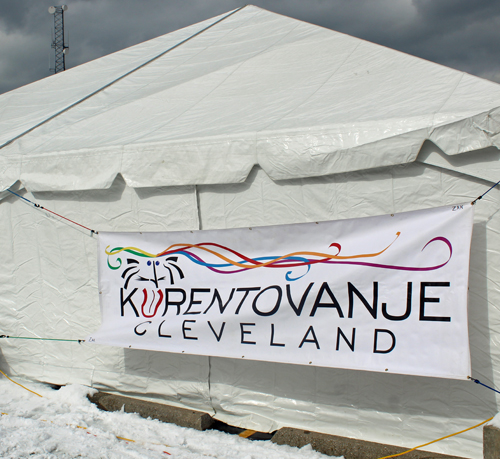 That did not dampen the spirit as crowds lined St. Clair for the Parade and then went to the heated tents for music, food and fun. Young and old dressed in costumes to scare away winter. And of course everyone wanted to take a picture with a Kurent or a Krampus character. 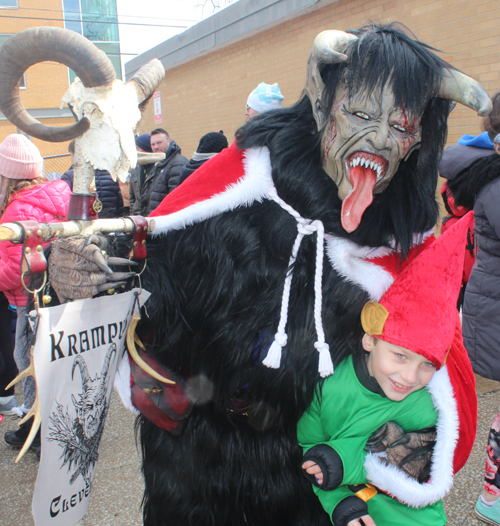 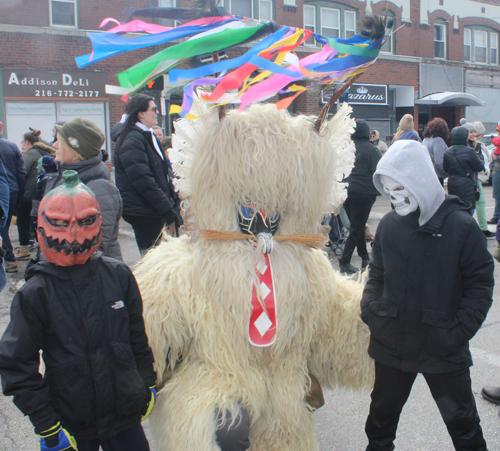 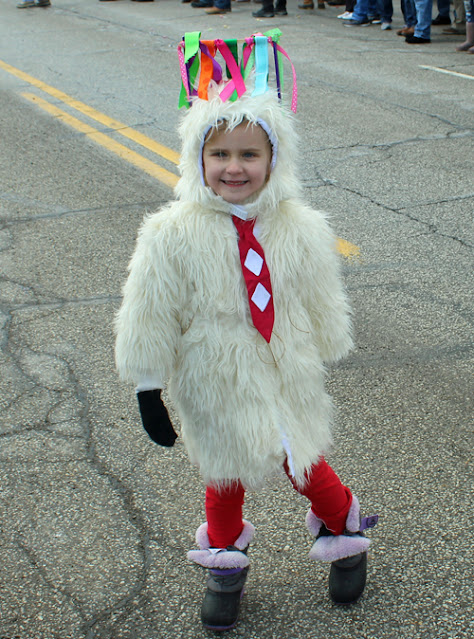 See many more photos from the Kurentovanje Festival

Here is a video of some of the highlights of the 2022 Cleveland Kurentovanje Parade beginning with the units lining up and getting ready to march on St. Clair Ave. to the Slovenian National Home. You will see the St. Martin de Porres HS drummers and cheerleaders as well as the scary Krampus characters, various Slovenian schools, the King and Queen of Kurentovanje, Councilman Mike Polensek and, of course, lots of Kurents! .

See lots of photos from the Kurentovanje Parade 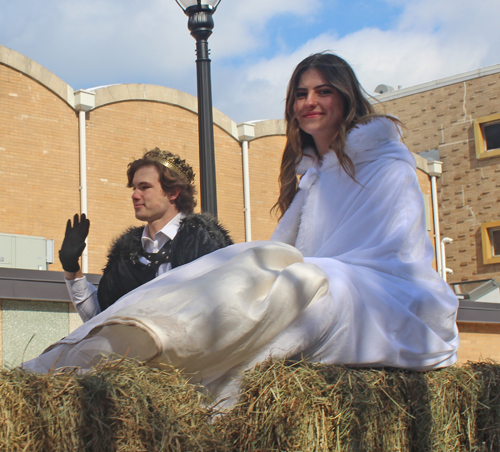 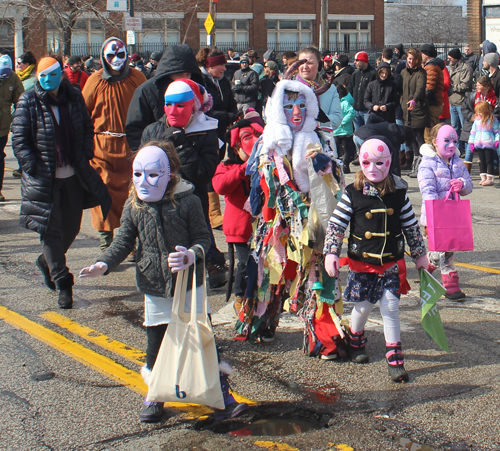