Beat up by a Woman? 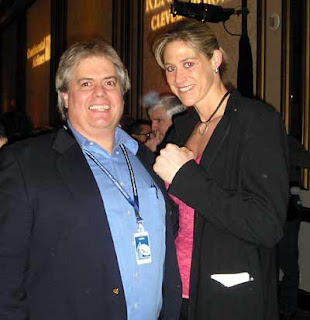 That used to be a school-yard taunt. “A girl could beat you up!”

After meeting professional boxer Vonda Ward at the Greater Cleveland Sports Awards banquet last night, I humbly submit to the fact. She could beat me up!

The 6’6” Ms Ward was one of many amateur and professional athletes at the event.

Also, check out the brief podcast with Good Morning Anchor and event MC Robin Roberts who told me about the state of women’s athletics and why we shouldn’t compare the NBA and the WNBA.
Posted by Dan Hanson at 1/30/2007 05:06:00 PM

I’m of that age where I used to practically live at the old Agora (on 24th and Payne) on weekends and for concerts. I saw some amazing local and national bands there including The Cars, Todd Rundgren, Meatloaf, Ian Hunter, Southside Johnny, Bruce Springsteen and plenty more.
So close to home, so intimate, so cool. I miss it. (I know, the new Agora is just down the street on Euclid but it’s not the same (or I’m not.))

And I am one of the few who really saw Bruce Springsteen twice on the same night. We saw him at the Coliseum and heard that Southside Johnny would be at the Agora. After the last song at the Coliseum we hauled a** and drove to the Agora and got there about 2 minutes before Southside introduced his “surprise” special guest. Wow – what a night.

I was also fortunate to be working with the electricians for most of the World Series of Rock concerts so I got to hang out backstage with the likes of the Rolling Stones, Bob Seger, Aerosmith, Rod Stewart and the Faces, J Geils, and so many more. By luck I took the best close-up of Peter Frampton in history. Better than the album cover.

I have a million stories from the World Series of Rock and the Agora days (not to mention the Euclid Tavern, The Flipside, Peabodys, etc) and got called by Carlo Wolff several months ago to share some for his book. The timing was terrible for me and after about a dozen calls and e-mails, Carlo gave up.

But he did produce the book, Cleveland Rock and Roll memories. Maybe I’ll have to write my own sometime.

I will be doing the Neosa webcast Wednesday (Jan 17) at 11AM with Jim Cookinham.

We'll be talking about/showing some new items from CES and MacWorld. Also taking a look at Microsoft Windows Vista and the new version of Office. 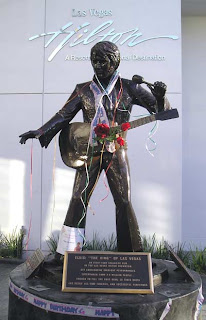 I made the annual trek out to the Consumer Electronics Show in Las Vegas. While I miss Comdex and the strict IT focus of that show, I have to admit that CES has some fun stuff.

I used my new Olympus digital voice recorder to do a bunch of podcasts from the show floor. They have a lot of crowd noise but I think it adds to the audio.

While there it was Elvis Presley's birthday so there were flowers and signs by his statue in front of the Las Vegas Hilton.