Why was a name chiseled out of the Cuyahoga County Court house cornerstone? Check out these pumpkins carved as different dog breeds for Halloween. They are not Jack-o-lanterns, but Dog-o-lanterns
Posted by Dan Hanson at 10/23/2010 06:27:00 PM No comments:

Don't use non-prescription contact lenses for Halloween costumes (or anything else).
Prevent Blindness Ohio has some stern warnings about them and other Halloween eye safety tips.
Posted by Dan Hanson at 10/22/2010 06:38:00 PM No comments: Cavaliers Hall of Fame radio announcer Joe Tait has been resting and receiving treatment for pneumonia since returning home from Houston, where he was hospitalized last week. As Joe continues to recover from pneumonia, he recently underwent a series of tests on his heart at The Cleveland Clinic locally. It has been determined that Joe is experiencing aortic stenosis and will soon undergo procedures on his heart to replace a valve and address other heart related concerns. These procedures will be conducted upon Joe's further recovery from pneumonia.

At this time, no exact timetable has been established for Joe's return to game broadcasts, but he is expected to be out at least through the rest of 2010. Updates on Joe will be provided as appropriate. Joe is in very good spirits and wanted to again thank the fans for their outpouring of support and concern for him during this time and he looks forward to getting back behind the mic as soon as he is able.

Best wishes go out to Joe from the entire Cavaliers family for a full recovery and return to game broadcasts when he is ready.

The 2010 Big Chuck and Lil' John Ghoulardifest will be held next weekend in... Parma!

Email ThisBlogThis!Share to TwitterShare to FacebookShare to Pinterest
Labels: ghoulardi 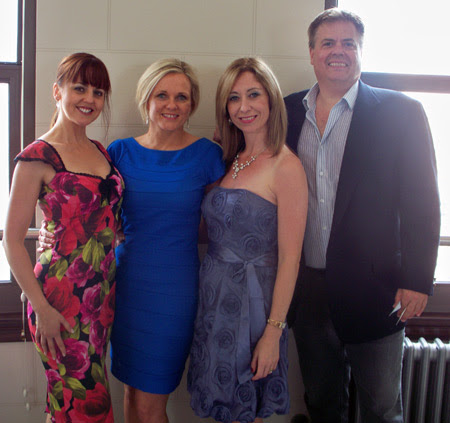 The beautiful and talented Irish Sopranos, Wendy Dwyer, Kay Lynch and Deirdre Masterson, visited the top of the Terminal Tower before an Irish Festival performance in Cleveland.

The CyberWall of Non-Violence now has over 100 signatures.

Check out the speeches by Rev. Marvin McMickle, Art McKoy and others at the Cleveland Non-Violence Pledge Kickoff Event. Butch Patrick may be 57 years old now, but he'll always be Eddie Munster, the only son of Herman and Lily Munster on the mid-1960s television classic "The Munsters."

Considering what many of the child TV stars now look like, I think he's aged pretty well.

Sure it's an Apple laptop

The Apple marketing machine is so good that it has inspired some, uh, creative thinking.

The best thing about this laptop is that it runs Windows natively - and there's a snack available at any time. I always expect that the groups with the largest population will be the most visited - German, African-American, Puerto Rican, Polish, Irish, Italian, etc.

But often the most visited groups are much smaller - Korean, Ethiopian, Jamaican, Liberian, Latvian, Estonian and so on.

Maybe the larger groups have a lot of choices on what pages to visit and there are fewer for the smaller groups.

September was a more traditional month, The Top 5 groups most visited were Hungarian, Irish, Korean, Chinese and Asian-Indian
Posted by Dan Hanson at 10/05/2010 03:31:00 PM No comments: