We had a good work session at Computers Assisting People (CAP) today.

Dan McMillan brought his son Liam and some students from John Marshall High School who helped us with some heavy lifting.

And the usual crew of CAP volunteers helped get PCs out to the community.

In this photo, 4 CAP volunteers pose with a Pastor of a Cleveland Church. CAP is providing PCs, printers, etc for a PC lab at the Church. 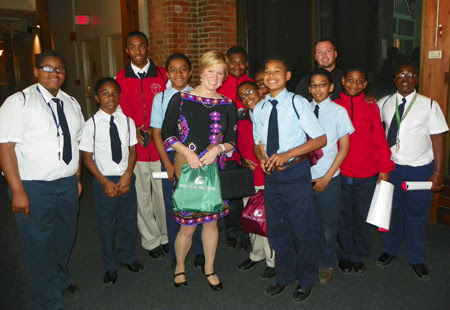 Students and TV3's Kim Wheeler at the Launch

The Diversity Center of Northeast Ohio kicked off its 10th Annual Walk, Rock and Run on Friday, March 23, 2012. They gave insights into subjects every woman wants to talk about like "How do you do it all?" and "How do you balance family and work?" The Cleveland Hungarian Development Panel, under the leadership of its president Marika Megyimori, hosted the 22nd annual Paprika! event on March 3, 2012 at The Ritz Carlton Hotel. Ms. Megyimori and Elizabeth Papp-Taylor served as Chairs of the sumptuous event.


This year's theme was "The Global Trek" in honor of keynote speaker Albert Ratner, the force behind the Global Cleveland project.

Arriving guests were escorted into the event by young people from the Hungarian Scout Folk Ensemble in traditional costumes.

The emcee for the evening was David Wittman, anchor of Channel 19 Action News. He introduced Dr. Michael Roizen, Chief Wellness Officer of the Cleveland Clinic.

Pics and video of Paprika from the Cleveland Hungarian Development Panel
Posted by Dan Hanson at 4/12/2012 04:23:00 PM No comments: Most ethnic and cultural communities are seeing it happen. Many of the people who have direct experience with events, formations of groups, key people and so on are aging or have passed on.

The memories and artifacts need to be captured and preserved or they could be lost forever.

In Cleveland, the Asian Indian Heritage Project is working to collect and preserve these memories and artifacts.

On a broader scale, the South Asian American Digital Archive (SAADA) is working on this nationally.

The Asian Indian community in Cleveland recently hosted the president of SAADA, Samip Mallick, who explained some of the archive processes.

It's something that every group should consider. The first edition of the Spring Fabulous Food Show pays homage to the masters of the flame April 28 & 29, 2012, at the I-X Center in Cleveland, Ohio.

But Macs don't get viruses

Smarmy Mac fanboys always claimed that Macs were immune from viruses because of superior coding. In reality, virus writers chose to ignore the relatively small (4% or so) percentage of Macs and concentrated their efforts on the Windows world.

Now that the Mac is gaining some market share, they are becoming a target.

The Flashback Trojan has compromised an estimated 600,000 plus Macs, making it comparable to the massive Conficker worm botnet that affected Windows PCs.

PC World reports that "According to current data from Net Applications, Mac OS X is the number two desktop OS with 6.54 percent market share. Windows, on the other hand, accounts for 92.48 percent of the market. Based on market share, the Flashback Trojan botnet is equivalent to a Windows botnet of nearly 8.5 million PCs. That makes it an even larger threat than Conficker--just on a much smaller platform."

They continued, "It doesn’t help anything that Apple perpetuates the myth of invulnerability. It takes time to develop a patch, but as soon as Apple was aware that the threat existed, it should have proactively communicated to Mac OS X users to make them aware. In fact, it should have provided users with instructions to disable Java and mitigate the threat pending a patch to resolve the issue. The fact that it didn’t is probably a contributing factor to why the Flashback botnet is as large as it is."
Posted by Dan Hanson at 4/07/2012 03:10:00 PM No comments:

This year's theme was The Global Trek and featured MC David Wittman and speakers Dr. Michael Roizen and Albert Ratner

Albert Belle and the Tribe

To me, Albert Belle was one of the most intimidating hitters ever. The way he snarled and grimaced at the plate had to scare opposing pitchers. And the famous photo of Albert pointing to his bicep is a classic.

He, of course, has been estranged from the Cleveland Indians but through the efforts of Carlos Baerga, Kenny Lofton, Sandy Alomar and Mike Hargrove Albert Belle visited spring training this year and the door was opened for more participation.

I am ready for it.

Food at Progressive Field for 2012 Season

I am normally a hot dog and beer guy at the ballpark but when there's a Cleveland Indians media preview and you get to sample all the goodies, it can be hard to resist. Some other interesting choices too. The Cleveland Indians continue their pioneering efforts re sustainability (solar panels, recycling, etc.) with the installation of a wind turbine at Progressive Field. Assistant director of operations Brad Mohr says they worked on the wind turbine with their neighbors from Cleveland State University. The wind turbine is located on the south-east corner of the ballpark.

See more about the wind turbine and the Cleveland Indians solar panels and other sustainability efforts.
Posted by Dan Hanson at 4/02/2012 12:41:00 PM No comments: