It kills me when a "celebrity" - famous by birth or because of a TV, music or movie career - dispenses advice for the rest of us - the great unwashed.

Madonna and her ilk tell Joe Blue Collar to cut back on energy consumption as they whiz around on their private jets and limos - not to mention the energy used in their mansions.

But I understand that the Nobel people wanted to make a statement with their Peace Prize this year, just as they did with Yasser Arafat years ago.

Read Faletra's column and then comments on his blog. It's not political - left or right. More of a statement about celebrity. Whatever the heck "celebrity" is.

Maybe that's why messages from people like Gandhi, Martin Luther King and Mother Teresa will endure. They walked their talk. Unlike most current "celebs" and politicians.
Posted by Dan Hanson at 10/28/2007 05:43:00 PM

I can't really comment much because my friends and I used to paint our faces and wear dawg noses for Browns games. I haven't done that in the new stadium yet - it seems too corporate.

But, for some reason, the girls a few rows ahead of me last Sunday wore Elf/Fairy/Brownie costumes complete with masking tape pointy ears. 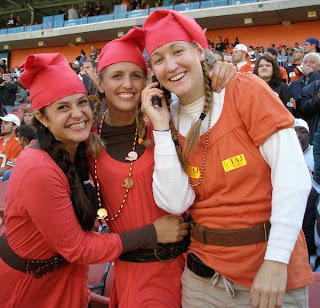 But the funniest/strangest get up was from a guy I saw after the game. He was a big guy and not a kid - probably mid-40's. He had on a huge orange clown wig and red nose - just like Krusty the Clown's wig in the Simpsons except it was orange, not blue. 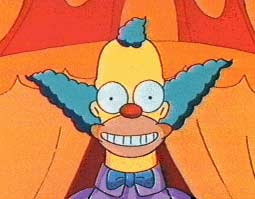 On the back of his jersey it had the name Krustofsky. Too funny!

Not so funny is the same sad situation on Euclid Avenue between Chester and Mayfield. While there are a few infrequent spottings of workers, this prime real estate and important road (hospitals, CWRU, University Circle, commuters, police, fire, EMS, etc.) is largely without any workers.

They could have completed that vital strecth in a few weeks - especially in this great weather - instead of the eternity it is taking.