Egypt shuts down the Internet

In the latest One Minute Great Lakes Geek podcast, the Geek talks about the historic nature of Egypt's Internet shut down.

He also challenges the listener. What would you do if suddenly your connectivity was gone? Got a minute? Take a listen
Posted by Dan Hanson at 1/31/2011 08:36:00 PM No comments:

At the Republic Day of India celebration last week, they put on a terrific play called Mortal Men & Women and their Immortal Words which featured historical figures such as Gandhi, MLK, Mother Teresa, Abraham Lincoln, Nehru, Indira Gandhi and Tagore.

Seeing friend Raj Pillai come out as Gandhi (shaved head and new mustache!) was wild. He was terrific - be sure to watch the short video.

But the loudest applause came at the conclusion of Pastor Kenneth Knox's powerful recreation of Martin Luther King's 'I have a Dream' speech.

It was a powerful performance by all and should be shown to school children and others throughout the world. Well done Raj and all of the other participants. 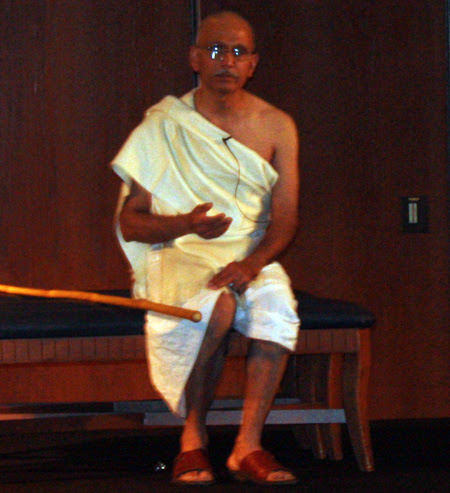 Egypt off the Internet 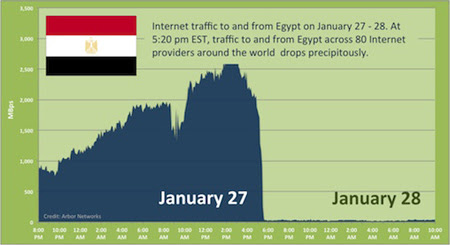 A picture (chart) is worth a thousand words. (Thanks ComputerWorld)

I get a ton of books to review and I know all my local librarians names because I visit so much. Yes, I read a lot.

This book stands out because it is like sitting around a bar listening to a great story teller with lots of juicy inside information.

His chapter on Art Modell and moving the Browns is a must read - should we be vilifying Mayor Mike White instead of Art?

It was a blast to read about the old places (Hollenden House, Theatrical, etc), events (Beer Night, the Charity Game) and institutions (Plain Dealer vs Press, WHK and Gary Dee, etc.)

Better yet, read Crazy, With the Papers to Prove It: Stories About the Most Unusual, Eccentric and Outlandish People I've Known in 45 Years As a Sports Journalist

The Sandbank Piano and My Thwarted Musical Career

Amy Kenneley is a terrific writer.

She was inspired by the strange appearance of a piano in the ocean outside of Miami to write an essay called The Sandbank Piano and My Thwarted Musical Career.

She tells about her own experience as a little girl with a seemingly abandoned piano.

Do you know someone turning 65 or older? The first baby boomers are hitting that magical number so there is a lot of interest, and confusion!, in Medicare.

Email ThisBlogThis!Share to TwitterShare to FacebookShare to Pinterest
Labels: B, C and D, Medicare: Parts A

If you own a business and have employees, you know the law requires you to file W-2 forms each year for them.

Depending on the size of your business and amount of time you have, that could leave you feeling like you're drowning in paperwork. But Social Security offers more than a life preserver - we offer you a way to file your W-2s without any paper at all! File your W-2s the fast, convenient, and paperless way - online.

Email ThisBlogThis!Share to TwitterShare to FacebookShare to Pinterest
Labels: W-2

SONY is closing one of its two remaining CD-ROM plants.

Future generations will have a difficult time in learning about our society because of the various outdated media they will discover - all requiring a special device to read the data.

You need to refresh your important data to new and current media.

This is the transcript of the current One Minute with the Great Lakes Geek show.

What is it with geeks and cooking lately? We used to be content with over-caffeinated beverages or beer and pizza. In fact the old Microsoft Geekfests at Comdex used to advertise by promising ‘Warm Beer and Cold Pizza”. The food was not the thing.

. It’s an O’Reilly book so it’s good and the subtitle of Real Science, Great Hacks and Good Food makes it clear why I am interested in it.


I also have a box of Ghostbusters Stay Puft Caffeinated Marshmallows

which are described as “The world’s finest caffeinated marshmallows.” I kid you not. You get 3 little trays that look like ice-cube trays, each holding 8 neat cubes of marshmallows – with a caffeine kick.

The marshmallows’ ingredients and consistency supposedly make them perfect for various creative cooking and science experiments. I can’t vouch for that yet but they do taste good – and have a little kick. And you have to like the “Who you gonna call - Ghostbusters” guy on the box.

Even CES wasn’t immune from the mix of tech and cooking. A device called the iGrill won the 6th Annual 2011 Bluetooth SIG Best of CES Awards for Best New Product. As the World’s First Bluetooth Cooking Thermometer for iPhone, they say it will Revolutionize the Way We Cook and give A Perfectly Cooked Steak, Every Time.

The $99 iGrill consists of:
• iGrill Thermometer with Projection Display and Probe – with easy-to-clean touch interface and multiple probe options.
• iGrill App for iPod, iPhone, & iPad - tells you status of food via Bluetooth.

This podcast was not brought to you by the Food Network. It was sponsored by the techies at Aztek. Visit aztekweb.com and talk to them about increasing your website traffic, conversions and sales.

Comdex, CES and tech shows after 9/11

I should be in Las Vegas. Maybe you feel that way too but for almost 20 years straight I went out to Vegas for COMDEX, the big Computer show and then CES, the Consumer Electronics Show, after Comdex died.

I got to see a lot of the most interesting people in tech at those shows – Bill Gates, Steve Ballmer, Peter Norton, Borland’s Philippe Khan, Intel’s Andy Grove, Gordon Eubanks of Symantec and on and on.

The crowds were ridiculously huge – one year it was over 250,000 techies jammed into Vegas. The cab lines snaked forever.

I will never forget the Comdex right after September 11, 2001. It was just a few weeks after the attack and we still didn’t know if the terrorists were planning more attacks and what the targets might be.

A lot was written that if they wanted to attack the so called decadence of the West, a la the World Trade Center, Las Vegas was the best target. One columnist wrote that the absolute perfect target for the terrorists would be to attack the Bill Gates keynote at Comdex in Las Vegas. That would send a message about the “evils” of technology, US tech companies like Microsoft and, of course, Sin City.

Despite all this many of us flew out to Vegas that year and even went to Bill Gates keynote address. Security was dramatically increased from the previous year with armed guards with dogs checking everyone out.

There were some nervous moments and Comdex, like many other trade shows, never again reached the crowds that it once had. The show was dead a few years later.

Part of that is because the technology lets us handle much of the trade show business virtually but there is still part that can be traced back to 9/11.

CES has captured much of the crowds of Comdex, especially as the computer industry gets more consumer oriented.

I didn’t make it to Vegas for CES this year but when I see the ubiquitous news blurbs about the crowds and new gadgets I can’t help but remember that one trip in 2001 when several thousand of us sat in the hall with one eye watching Bill Gates and the other looking for the nearest emergency exit.
Posted by Dan Hanson at 1/09/2011 07:50:00 PM No comments:

Role Model for Women scientists and others 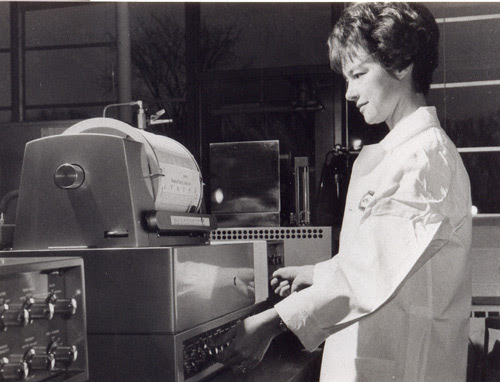 Jenny Brown is a terrific role model for young girls and women. Still going strong at age 82, Jeanette Grasselli Brown has had a career that would be the envy of anyone.

Add to this that she is a female who entered a specialty Chemistry field in 1950 and it's more impressive.

Why? Well, 2010 was such an interesting year in the tech, science and business worlds that the Great Lakes Geek lives in that it was hard to keep up with it all.

We all have stacks of paper and gigabytes of digital content to consume and may never catch up. So in 2011 we are going to add to our lengthier podcasts and video casts with a quickie weekly podcast.