Wabbit Season - the people have spoken 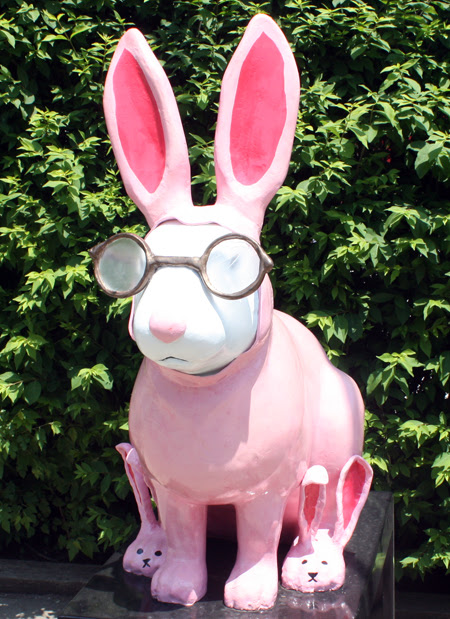 Summer's over and so is the contest to vote for your favorite Year of the Rabbit sculpture. 19 of the 24 Rabbits received at least one vote. The Rabbit that got both the most votes and the most first place votes was Ralphie Rabbit at 1419 East 40th.

Here are the Top 5 Rabbits that you voted for:

You can still view most of the Rabbits in the St. Clair-Superior neighborhood. See photos of all the Rabbits and read some of the comments.
Posted by Dan Hanson at 9/28/2011 10:43:00 AM No comments:

I first met Luis Martinez when he was nominated for the Cleveland International Hall of Fame.

I didn't know he was a two-time Purple Heart Vietnam Veteran - I just knew about his great work in the Cleveland Hispanic community.

He wrote a tribute article about a young friend who died in his arms in Vietnam. He sent it to the Chicago Tribune in hopes of having it published on Memorial Day. The article did not make the paper but we thought it should be published.


I tried to keep your son alive that night in 1970. Our Corpsman, "Doc" Coonfield, pronounced him dead but he was a MARINE. I just couldn`t accept the fact that one of us, a good guy, had been killed.

Oblivious to the growl of weapons blindly seeking revenge against an invisible enemy, I kept pumping his heart and blowing air into his mouth trying in desperation to bring him back to life. Our unit, CAP 2-7-10, operated in an isolated area, perhaps a 30 minute flight South of DaNang. We agonized what seemed an eternity for the arrival of the med-evac chopper.

In the meantime another Marine, the dog handler, snapped; he shook uncontrollably the way a person can when overcome by horror. By the time the thunderous apparition found its way to us through the hostile night air I had been overcome with rage.

As we loaded the helicopter and it lifted off, I unleashed my contempt at the perceived delay with pitched profanity and a gesture of disrespect as it disappeared into the black of night.

***
Read the rest of this gripping tribute from Luis Martinez

For those of us who knew Ivan we probably knew about his life with horses (dressage) and publishing (his horse magazines). He was an early adopter of desktop publishing and was always searching for the proper font and often Cyrillic typefaces.

I met him in the Greater Cleveland PC Users Group and those are my recollections.

But he had another career before that I was just reminded of by an e-mail.

I was interested to find your online article about Ivan Bezugloff; just this past Saturday I bought (at an Amateur Radio "swap meet" in Adrian, MI) a voltmeter his second firm -- IB Instruments -- had made. Interestingly, it is the world of dressage that remembers him, not electronics, there having been thousands of small companies that existed only a few years in the 1960's - 1970's. But your article was a memory passed on.

The Divine Comedy by Dante 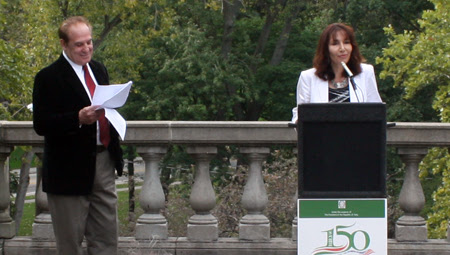 What better place to hear readings from and discussion about the classic Divine Comedy by Dante Alighieri than the Italian Cultural Garden?

I was just working on a Halloween Virtual Store for ClevelandSeniors.Com and ClevelandWomen.Com. Lots of costume ideas, decorations, party stuff - as expected.

I looked at a previous store and saw the John McCain and Sarah Palin masks. This isn't a prez election year so I didn't expect much along those lines but there are a bunch of Obama masks such as The stories of the finalists and winners were truly inspiring.

Photos and videos from the TiE International Entrepreneur Awards
Posted by Dan Hanson at 9/22/2011 10:03:00 AM No comments:

What good is having apps or data in the Cloud if you don't have good connectivity? US broadband speeds have lagged many much less technical countries. Is that a concern for Cloud computing? And what is an acceptable level of downtime for Cloud computing?

The Great Lakes Geek asked these questions to a panel of CIOs at the NEOSA CIO Symposium. Check out the interesting responses from Greg Kall, CIO of Summa Health Systems and Bill Blausey Jr., CIO of Eaton Corporation. The Ukrainian Cultural Garden was the host for the 64th One World Day.

Hundreds enjoyed the beautifully refurbished Garden and the rededication of the statue of Lesya Ukrainka on its 50th anniversary and the 140th birthday of the poetess.
Posted by Dan Hanson at 9/12/2011 12:25:00 PM No comments: The Syrian Cultural Garden was the staging ground for the Parade of Flags at the recent One World Day. The cool part was that a group of women, in various ethnic costumes, started an impromptu dance around the Garden as Syrian musicians played. The 10th annual Support Our Troops Luncheon was held on September 8, 2011 at Windows on The River.

This year, which also marks the 10th Anniversary of the 9-11 attacks, the luncheon had a very special keynote speaker, Mr. David Beamer. Mr. Beamer is the father of Todd Beamer. Todd is the young man who rallied the passengers of United Flight 93 together with his cry "Are you guys ready? Let's roll!"


Mr Beamer had some very harsh warnings for us all - the enemy is out there, infiltrating our way of life.

Here is the transcript of the Great Lakes Geek one minute podcast on User Groups and 9/11.
***

I remember 10 years ago after the terrorist attacks on 9/11 that we were all looking for some way to help the victims. I received a message from a friend in New York who indicated that the emergency personnel were short on PC hardware because much was lost or damaged.

I brought this to the attention of the volunteers of Computers Assisting People (CAP) and we adapted the words of Flight 93 hero Todd Beamer and said ‘Let’s Roll.’

I sent out a message to some other user group leaders and they all wanted to assist. Bob Kwater in Dayton was ready to hop in his car. Many of us were making plans to make the trip to New York with our equipment to assist.

Then we got the word that the authorities needed to limit travel into the area and that even our shipments of PC gear would not reach their destination in a timely manner. So we called off the New York plans and spread the word to the other user groups.

We weren’t able to directly assist but the willingness of so many to drop everything to help was a great example of the ‘users helping users’ philosophy that has been the mantra of user groups since the 1970’s. Groups like CAP have extended this to the next level – ‘users helping the community.’

Hopefully we will be free of such tragedies in the future and user groups will be able to focus their volunteer efforts to helping their communities.
Posted by Dan Hanson at 9/09/2011 07:40:00 PM No comments: In case you haven’t logged on to GreatLakesGeek.Com yet today, I wanted to let you know that you can download Microsoft Office 365: Connect and Collaborate Virtually Anywhere, Anytime by Katherine Murray as a free eBook.

Haven't had a chance to read it all yet but the Table of Contents and what I've read so far is promising. Office 365 and the Cloud are a whole new approach.


Of course if you already went to GreatLakesGeek.Com or follow the Geek on Twitter or Facebook (@greatlakesgeek) you'd already have the book
Posted by Dan Hanson at 9/07/2011 11:11:00 AM No comments:

This was Class 4 of a summer series by my sister Pat. It tastes great!