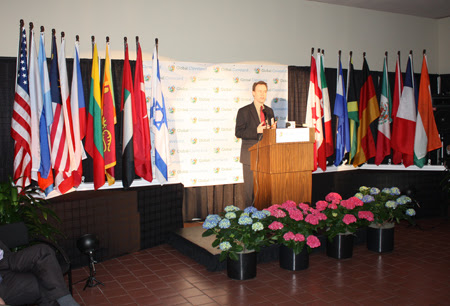 A large crowd filled the 3rd floor of 200 Public Square (soon to be renamed the Huntington Bank Building) to hear news that many thought would never be announced.

The idea to grow Cleveland by attracting and retaining migrants and immigrants has been discussed for a decade. Last year the vision began solidifying into action as Forest City's Albert Ratner, with support from the Cleveland Jewish Federation, led an initiative which has become Global Cleveland.

The tagline for Global Cleveland is "Connecting Newcomers to Opportunity and the Region." None of the numerous businesses, organizations and individuals involved in Global Cleveland is satisfied with the declining population of the region. Aggressive efforts to attract and retain people will yield increased economic opportunities and development for all.

At a press conference launch on April 5th, Global Cleveland Board Chairman Baiju Shah announced large funding sources and a location for their headquarters which will serve as a Welcoming Center.