Prime Minister of Ireland in Cleveland

The Taoiseach (Prime Minister) of Ireland Mr. Enda Kenny was in Cleveland on October 12 and 13, 2012. It was the first ever visit of a sitting Irish Prime Minister to Cleveland.

ClevelandPeople.Com covered the historic visit with photos and videos from many of the weekend's event starting here.

1) Taoiseach Enda Kenny at a special presentation of the City Club of Cleveland (Intercontinental Hotel on Cleveland Clinic Campus) on Friday, October 12, 2012.

2) Taoiseach Enda Kenny at a private meeting at Cleveland City Hall with Mayor Jackson and other city officials.

3) Irish Cultural Garden visit. Besides the main page, there are 6 more pages of photos of the hundreds of attendees in the Garden. Who do you recognize?

4) The last public appearance of the Taoiseach was at the annual Mayo Ball where James C. Boland was named 2012 Mayo Person of the Year. 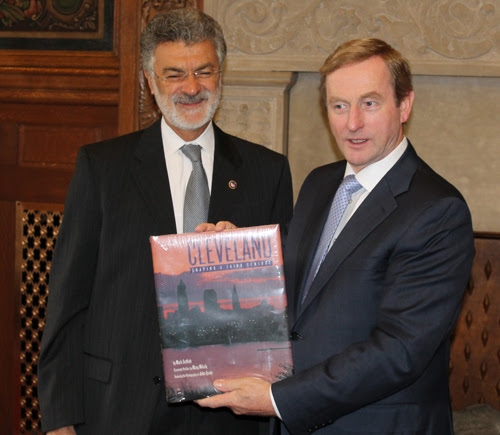