Congressman Dennis Kucinich accepted the first annual Champion of Immigrants award at an event in Cleveland sponsored by the International Services Center.

As its first recipient of this annual award, the ISC selected Dennis J. Kucinich, former U.S. Congressman and Mayor of Cleveland, because of his ongoing dedication and service to immigrants both locally and on a national level. As the grandson of immigrants from Croatia and Ireland, Congressman Kucinich understood the diversity that makes up the ethnic neighborhoods of Cleveland, as well as those in the African American and Latino communities. Throughout his political career he “stood up for the people,” addressing their concerns and problems.

As a Member of Congress, his advocacy for immigrants and refugees helped many come and stay in this country. He also opened doors for bilateral trade with the countries represented by immigrants in Greater Cleveland. He has always put immigration to the forefront of his service to our community and country, and so richly deserves this honor.

Photos and video from the event 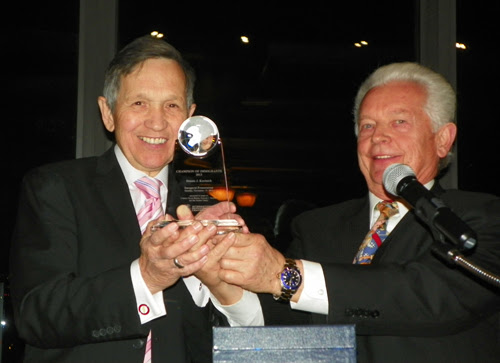