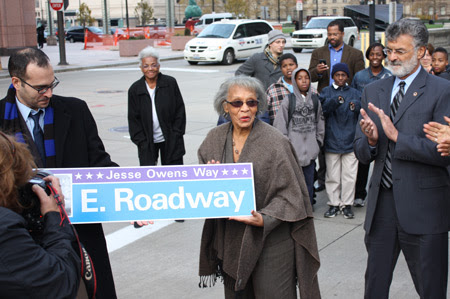 The Nazi Olympics Berlin 1936, now showing at the Maltz Museum of Jewish Heritage in Beachwood, explores the issues surrounding the 1936 Games--the Nazis' use of propaganda, the intense boycott debate, the history of the torch run and the historic performance of Jesse Owens and more.

On Monday, November 15, 2010 a ceremony was held to dedicate East Roadway (NE corner of Public Square) as Jesse Owens Way. Jesse Owens' daughter Gloria was on hand for the ceremony.

Already a track star for his accomplishments at Cleveland East Tech High School and the Ohio State University, the 1936 Olympics in Berlin made Jesse Owens a household name and a symbol who shattered Hitler's racist ideals.