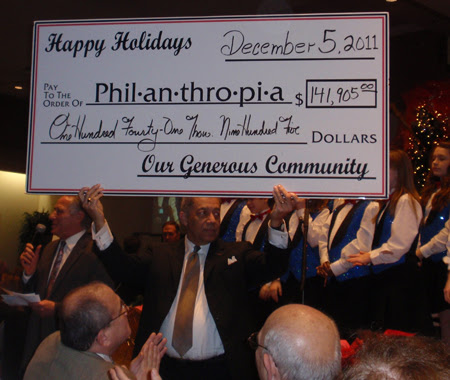 After the tragedy of 9/11, New York City absorbed such a large portion of all charitable donations that many local non-profits struggled to reach their own goals. In response, Harlan Diamond and Executive Caterers rededicated their December Corporate Club luncheon to the support of local charities, especially smaller organizations without substantial resources of their own.

That first Philanthropia saw 200 guests and raised $9,000. In 2007 it had outgrown the Grand Ballroom, spilled into the Lander Ballroom, and with over 1200 guests they raised over $128,000. Each year's community response is bigger and better.

As you can see from the giant check held by MC Leon Bibb, the 2010 Philanthropia raised $141,905 for local charities. Congratulations to Harlan Diamond and his team for another outstanding community event.

Email ThisBlogThis!Share to TwitterShare to FacebookShare to Pinterest
Labels: Philanthropia