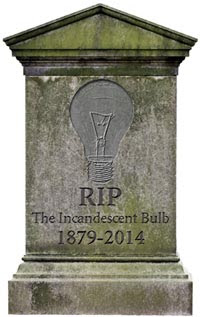 Jason Lomberg, Technical Editor of ECNmag.com has a terrific article about the forced obsolescence of older technologies such as the incandescent light bulb.

As Lomberg says, "Just as government shouldn’t prop up legacy technologies, nor should they take the opposite approach—ban them. The European Union and the US government have taken the latter approach. The first phase of the EU’s ban, covering 100 W bulbs, went into effect September 1st. 75 W will get the ax in 2010, followed by 60 W in 2011, and closing out with 40/25 W in 2012. "

The bans are just leading to lots of purchases and hoarding.

"The ban has proved to be massively unpopular. In one poll, 64% of Austrians found the legislation “nonsensical.” Holger Krahmer, a Member of the European Parliament (MEP) from Germany's FDP party, declared the ban “light bulb socialism.” Czech President Vaclav Klaus is apparently urging consumers to buy up incadenscent bulbs in droves.

And the public is responding—with their wallets. Der Spiegel reports a huge increase in incandescent sales across Germany. For 100 W bulbs, sales rose by 80-150%. Clearly, the market has decided against CFL’s."

In the US, the "100 W bulb will be the first to go, meeting its untimely demise in 2012. By 2014, incandescents will be completely eliminated. What happened to consumer choice? Fair competition?"