The Albanian Cultural Garden hosted a canonization ceremony for Blessed Mother Teresa on Sunday September 4, 2016. "Many people don't know Mother Teresa was Albanian," said Cleveland Councilwoman Dona Brady, one of the founders of the garden and leader of the ceremony.

The Albanian Garden was the 29th ethnic garden to be dedicated in the 100-year-old-Cleveland Cultural Gardens. The dedication of the garden in 2012 was attended by Albanian President Bujar Nishani, Albanian Ambassador Gilbert Galanxhi and Cleveland Mayor Frank Jackson. The ceremony included three musicians who were adopted as children from one of the orphanages of Mother Teresa. See photos and videos of the 2012 Albanian Garden dedication.

The Albanian Garden is centered around a 7-foot bronze statue of Mother Teresa. 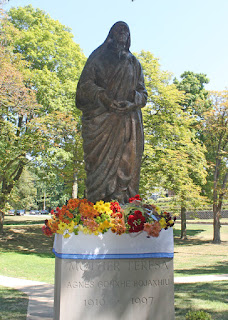 Mother Teresa of Calcutta, ethnic Albanian, Nobel Peace Prize winner and founder of the Missionaries of Charity who dedicated her life to helping India's poor, was canonized as Saint Mother Teresa by Pope Francis. "We ourselves feel that what we are doing is just a drop in the ocean, but the ocean would be less because of that missing drop" - Mother Teresa

There were several speakers who told about Mother Teresa's life and mission and how they were influenced by her. 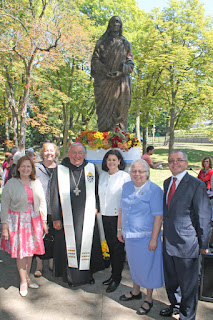