At ClevelandPeople.Com we have known for years what a diverse and vibrant city Cleveland is. After all, we have covered the events, people, music, food and other cultural traits of over 100 groups that have large communities in the area.

But we wanted a visual representation to demonstrate this to others. So at the 2014 Cleveland Asian Festival (CAF) we set up a large map of Asia and asked people to place a dot where they or their ancestors came from. At first people were reluctant to do so and we had some language issues. But gradually people migrated to the map and discussed (in various languages) with us and their family and friends.

There were quite a few parents showing their adopted children "This is where you came from!"
By the end of the CAF portions of the map were saturated with dots - especially China, India, Vietnam, Korea, Japan and the Philippines. We encouraged people to place their dot as close to the city/village as they knew. Many were excited to have their small town, far from a capital or well-known city, represented.

The interest generated from the map at CAF convinced us to continue the efforts. For the One World Festival in the Cleveland Cultural Gardens, the ClevelandPeople.Com booth had our map of Asia but also a large map of Europe and a map of the world that clearly identified countries in Africa and the Americas. 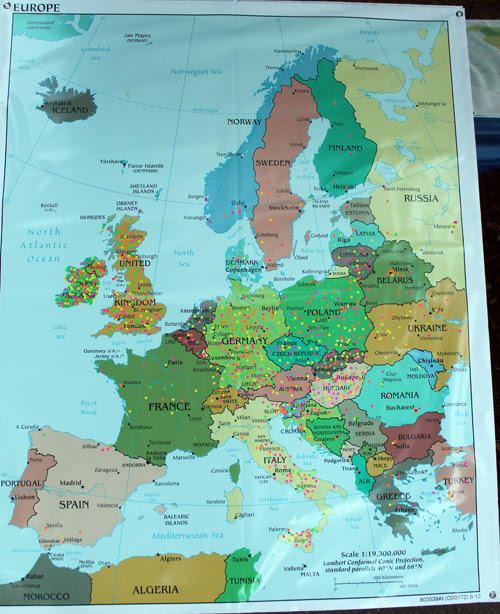 Over 80 countries were rrepresented and some great stories.  Check it out - Cleveland's Ethnic Diversity Mapped