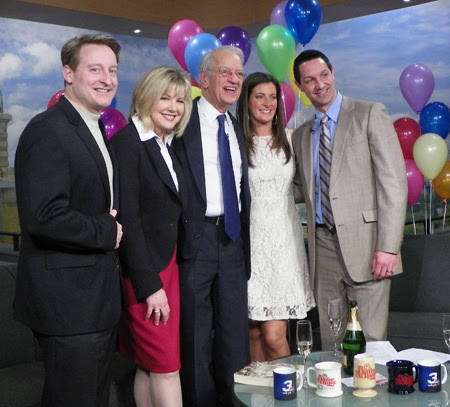 There was a special mood at the taping of WKYC's Good Company Wednesday morning.

There was frivolity - balloons, cake, champagne.
There was nostalgia - remembering good times with good friends.
There was sadness - saying good bye is always difficult.

The occasion? Fred Griffith, Cleveland television legend, was doing his last show. He was retiring after having logged in more live hours on television than anyone else in history. (Regis Philbin and Fred are very close in hours).

Everybody in Cleveland knows Fred Griffith. He has been a familiar and well-loved face on television for decades.

Wednesday February 22, 2012 was Fred's last day on the air at WKYC on the Good Company Today show. Family, friends and co-workers from the present and past paid tribute to the TV pioneer.

Whatever is next for Fred Griffith he will tackle the task with the charm and grace he always has and we look forward to his next adventure.