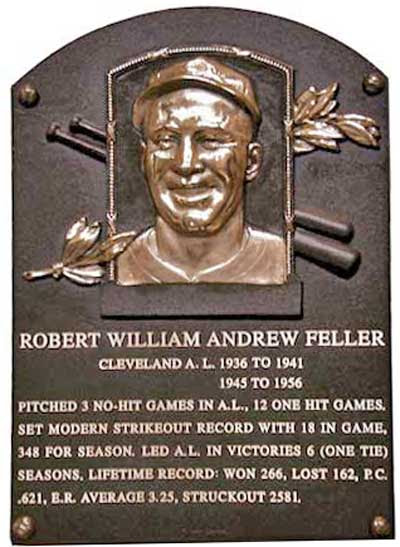 The baseball accomplishments of "Rapid Robert" are legendary. He is arguably the greatest right-handed pitcher ever to play the game of baseball.

But there is so much more to Bob Feller than just the statistics. At the beginning of the peak of his career, Bob felt a duty to put aside baseball and go and defend his country. Two days after the Japanese attacked Pearl Harbor, he enlisted in the U.S. Navy and became an anti-aircraft gunner on the U.S.S. Alabama.

See more in our profile of Bob Feller

On a personal note, after visiting Bob and his lovely wife at their home he sent me an autographed photo of the two of us. I have had it hanging in my office ever since. He was a class guy.
Posted by Dan Hanson at 12/16/2010 10:15:00 AM