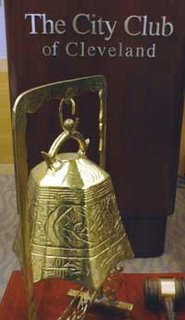 Yikes! The Bell of Free Speech has been Silenced as the Historic City Club of Cleveland Gong goes Missing.

City Club employees believe that the gong and gavel, which are valued at $4,000, were taken sometime between 6 p.m. on Friday, October 13, 2006, and 11 p.m. on Saturday, October 14, 2006. City Club officials are reviewing building security tapes in hopes that they will be able to determine what happened.

The gong was donated to The City Club by Dr. Louis Siegelstein, a City Club member. His family obtained the gong from what was then Shanghai, China in the 1930s. Since then, the gong has signaled the beginning and the closing of all City Club Forums and programs. It is heard every Friday on the live radio broadcasts of City Club Forums on WCLV-FM and on The City Club’s radio network, which includes more than 200 stations across the country. In addition, viewers see it every week on the WVIZ television broadcast of Friday Forums.

The City Club will not seek prosecution if the person returns the gong. Anyone with information about the gong is asked to call The City Club at 216.621.0082.

”The City Club gong is an immensely important artifact for The City Club and the city of Cleveland. It has become a symbol of free speech, ringing in historically significant speakers for many years, including several U.S. presidents and Cleveland mayors, Babe Ruth, and Rosa Parks,” says City Club executive director James Foster. “We hope that the person who took the gong will realize its value to our region and the nation. We welcome its return with no questions asked.”